Our explorations provide travelers with an in depth experience of this austral territory, for which we have outlined six different exploration zones, each with its own set of unique geographic, cultural and biosphere characteristics. In order to go deeper and truly immerse in the territory around you, we recommend you begin exploring the Convergence zone– where our lodge is located– continuing with explorations in the Forest, Steppe, Estancia, Glacier and, finally, the Mountain zones.

The intersection, the estuary, the frontier. Sometimes the collision of two worlds is a world in itself.

Convergence zones are places where two or more zones meet, generating unique characteristics product of their interaction. Explora is located within this area, on the shores of Lake Pehoé, with privileged views of the Paine Massif. From here you can partake in self-guided explorations or go by horse to nearby lookouts, the ultimate introduction to Patagonia. Chromatically unique, in the explorations around Lakes Pehoé, Toro and Nordenskjöld, shades of blue, green and grey appear due to centuries of glacial erosion and accumulation. At the end of the day we recommend visiting the Ona Bath House to contemplate the chromatic variations of dusk falling into night.

Only the Patagonian steppe is able to endure the relentless blow of the southern winds. This endurance portrays the character and courage of the people, past and present, who have inhabited these unusual lands throughout history.

The open stretches of the Patagonian steppe dramatically contrast against the Paine Massif and the surrounding mountains, hosting a substantial part of the park’s wildlife. Traces of the ancient Aonikenk people can still be found in 4000-year-old cave paintings, which provide further inklings regarding their survival. Explorations in this area allow close encounters with the park’s wildlife: guanacos, rhea, foxes and even – if you’re lucky– the elusive puma.

The gaucho and Patagonia are one, sharing temperance, silence, mystery and fascination. Trying to tell the story of this territory without their voice, is having completely misunderstood its essence.

The Estancia 2 de Enero is a Patagonian ranch, property of Explora, where some of our most demanding horseback rides are held. The ranch is where – between October and April and depending on weather conditions – we hold the Quincho: a traditional Patagonian gathering in which the gauchos prepare a roast lamb overlooking the Paine granite towers. Conversation and laughter flow naturally as a mate is passed around among the gauchos and our guides, an ideal setting for camaraderie, laughter and spontaneous storytelling.

In a landscape dominated by monumental geography and infinite open spaces, forests act as refuges and safe havens for the park’s fragile biodiversity. Some sectors of the forests are tall and majestic, whereas others are low-lying shrub, which stoically resist the harsh Patagonian winds.

This area’s explorations lead us, among others, to the Rio Pingo Valley and the Ferrier hill, crossing lenga, ñirre and coigüe forests – species found only in Patagonia. Walking through these lands feeling the sounds of birds above and the murmur trees in the Patagonian wind is an experience that revitalizes the body and ignites the senses.

Glaciers are monuments of time. Patient titans of nature whose fragile presence is in great measure responsible for the geographic spectacle of Patagonia.

This area’s explorations cross ancient nothofagus forests and tranquil lake beaches from which runaway glacial icebergs can be spotted nearby. A catamaran ride over the Grey Lake will take you to the Grey Glacier, part of the Southern Ice Fields, the third largest continental ice mass on the planet. From the Explora dock we sail across Lake Pehoé reaching the French Valley, gateway to the Paine massif’s heart. As you walk through the valley, dense forests of ñirre and lenga surround you, interrupted only by the watchful presence of the towering Paine Horns and the French glacier.

Mountains define local identity: a natural wall which only condors disregard, a presence which points to the stars above as the only vanishing point in the Patagonian landscape.

Mountain explorations allow travelers to reach higher altitudes, crossing different ecosystems with distinctive wildlife and nature. Despite being more physically demanding, as a reward they offer spectacular views of the Paine Massif, the Southern Ice Fields, the Torres del Paine and the Chacabuco Mountain Range, among others. Well-equipped and willing to embrace the famous Patagonian wind, it’s possible to ascend to the granite amphitheater in the British camp, the base of the Torres del Paine or the summit of the Tenerife and Castillo hills. 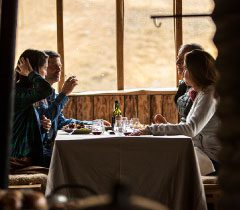