HomeStoriesA Wedding at the End of the World

A Wedding at the End of the World

February 14, 2013. Lisa and Toby are horseback riding through the pampas of Torres del Paine National Park. One of the gauchos who works in Explora Patagonia is with them. The light breeze messes up their hair and it is raining. However, none this is bothering them. They are both very happy and enjoying to be there. “You just can’t image a more astonishing background”, says Toby to describe the landscape that surrounds them hours before marrying Lisa.

Lisa Jordan and Toby Past are both American. They met in 2003 in Atlanta, at a common friend’s party. Since then, they started going out and fell in love.

One day, Toby asked his girlfriend to make a list of the three places in the world she had to visit. Patagonia was the number one destination for both of them. For their tenth anniversary, which happens to be Valentine’s Day, they decided to travel to the end of the world to get married. 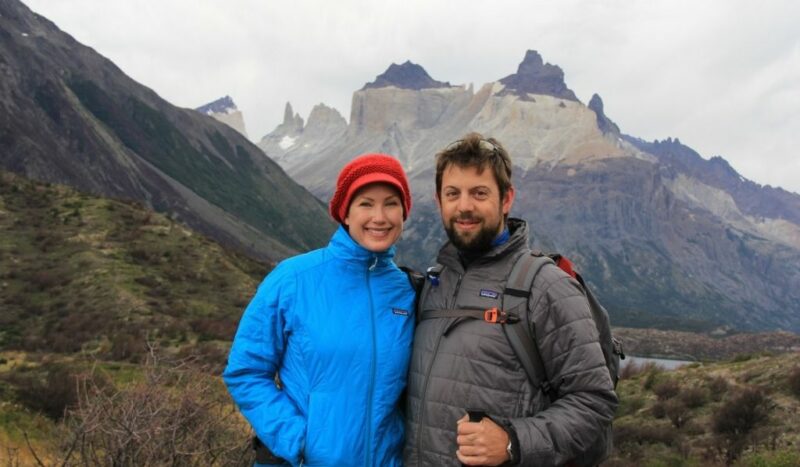 They arrived to Explora Patagonia on February 11, 2013. The days prior to the ceremony they had some of the best adventures of their lives, according to Toby’s in a blog he created to share the details of their trip.

They made the walk to French Valley, where they discovered the heart of a hanging solid glacier from which huge ice pieces break off. They walked 9 kilometers to get to the base of Torres del Paine and swam in the Pehoé lake at around -3°C. “All these excursions are fantastic and taking a dip in this lake of glacier origin was very exciting”, the traveler enthusiastically describes.

(Image courtesy of Toby Past and Lisa Jordan).

“We had planned a very small and intimate ceremony, but the rumor of our wedding spread out and the day we married close to 50 people showed up. We were both so nervous, but at the same time so happy. The friends we made the previous days were very kind to us, especially Rosario, the Explora Patagonia host, who organized everything in a very special way.”

They held their hands tightly and tried to hold up their tears of happiness, as they walked down the stairs to where the ceremony took place. They stood in front of the Civil Registry judge and soon they were holding a champagne toast in the company of the staff members, the rest of the passengers, and the best views of Torres del Paine: Pehoé lake and the Cuernos (Antlers) del Paine.

Romina Da Pieve, then an Explora Patagonia guide, remembers that day as a special occasion. “It is not something that takes place every day”, Romina comments to the person who had held the role of interpreter to what was now the second marriage that had taken place at the hotel, the first having been held just the year before.

Rosario Villagra, the hotel hostess, remembers that day with particular nostalgia. It was the first time a wedding was celebrated in Explora Patagonia and, according to her sayings, they were afraid things might go wrong. The bride and groom both wanted to marry at the dock, but at five o’clock, the time of the wedding, the weather changed and they had to improvise. They setup a table in front of the large window facing the Cuernos del Paine, decorated the room with flowers and candles and invited the rest of the hotel passengers and staff. “It was beautiful and emotional. I was Lisa’s bridesmaid and one of our guides, Toby´s bestman”, says Rosario.

They both agree that the wedding turned out to be a success. “This year we celebrate our third wedding anniversary and we can’t wait to return to Explora to celebrate some of our anniversaries”, assures Toby.

Discover more of our lodge in Patagonia